Red Hat is the latest company to join the big happy cloud provider family and they have interesting stuff to bring. OpenShift is a “portfolio of cloud services for deploying and managing applications in the cloud”. Basically with OpenShift tools you can easily deploy for example JavaEE applications to Amazon cloud. OpenShift takes care of the difficult parts, like setting up and configuring the servers.

At least for me the most interesting aspect of OpenShift (Flex) is the support for running JBoss in the cloud. It is a little bit like Amazon Elastic Beanstalk, but instead of Tomcat you get JBoss (either v6 or v7). OpenShift provides ready made configuration with clustering support. You can also choose number of other components, like memcached, Infinispan or MongoDB. By the default you will also get Apache to act as a front end server. Common configuration parameters like web server settings (logging, url rewriting) and JVM settings can be tuned via the web user interface.

In the beginning OpenShift only supports Amazon EC2 as the cloud provider, but they mention that other providers (probably Rackspace Cloud) are being certified. During the developer preview you can only create clusters with max four nodes, but that limitation will go away once they lauch the commercial service. 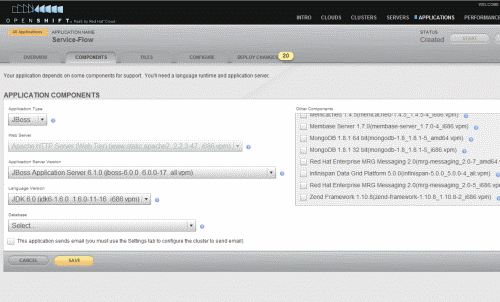